I Workshop of the PhD Students in Civil Engineering 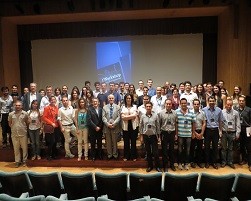 The event, which was mainly devoted to the presentation of the PhD ongoing works, through oral presentations (by PhD students developing their PhD Thesis) and poster sessions (by 1st year students), has also counted on important contributions from well-known personalities from the main area of Civil Engineering. Petr Hajék, from the University of Prague, Maria Rafaela Saldanha, from LNEC, Paulo Vila Real, from the University of Aveiro, Jorge Alfaiate (IST), Maria de Lurdes Antunes, from LNEC and Elsa de Sá Caetano (FEUP) were the I edition' guests, and had promoted lectures in several scientific areas such as sustainable construction, water resources, fire in structures, security in structures, transport infrastructures and bridges and structural structures, respectively.

There still was time for ludic and sportive activies, that gave to the I Workshop an important “living together” environment, as well as an opportunity for cultural exchange. In the end of the first day, there was a “Jogo da Malha” (traditional portuguese game) championship. The event ended at Restaurante Baptista, Guimarães, with a great final dinner that gathered academic staff and PhD Students.

Application to the PhD in Civil Engineering​

Post your questions or ask for more information through our email: sec-phd@civil.uminho.pt or click on the button below and send us a message.

Send us a message

Post your questions using the form bellow or ask for more information through our email: sec-phd@civil.uminho.pt